I started my Constitution Day tour at my home institution, Marquette, on Monday. There I spoke to the ACS student chapter about constitutional values and the right to vote. Then I hopped on a plane and headed out to Penn State Law School for another discussion of constitutional values and their relationship to voter suppression. That was quite an adventure, as this tweet shows. The final leg of my tour takes me to the left coast and the University of Puget Sound. In fact, I am writing this post just before my flight to Tacoma. If you are in the Tacoma/Seattle area on Thursday at 5:00 pm, I hope you will join me.

Integrity, Equality, & the Fragility of the Right to Vote: A Constitution Day Lecture
University of Puget Sound
Thursday, Sept. 20 5:00 pm in the Rotunda 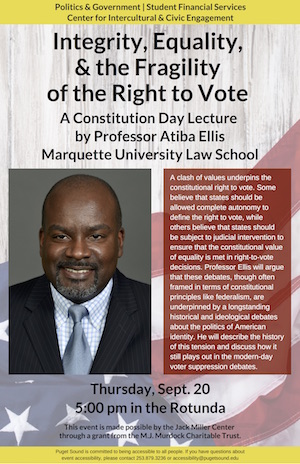 At the heart of the modern battles over the American right to vote is a tension between two constitutional values. On one side is the original Constitution and the autonomy it grants the states over the franchise. On the other are the Reconstruction Amendments and the modern demands for equality. With few textual caveats, the Constitution of 1789 gave states near-autonomy to shape the right to vote. Many states did so in a way that reflected an antebellum vision of citizenship rooted in popular (in its time) eighteenth-century notions of status, wealth, and identity—a definition that excluded many. This value of autonomy, and the social ordering underlying it, continues to influence the modern contours of voting rights despite the social transformations the United States has undergone. Yet these movements toward social transformation put the value of autonomy in tension with the value of equality, so that within a generation of the framing of the Constitution, the identity of the American citizen became a contested concept. This contest led to the post-Civil War amendment of the Constitution to include doctrines geared towards citizenry equality and the practice of federal intervention to insure enforcement of those doctrines. Thus, from a modern perspective, equality of citizens has become an important (and some may argue more important) a value as state autonomy. Yet this proposition remains a contested concept measured against the value of state autonomy. Thus, state autonomy (and its use to hold to the arguable residuary of an antebellum social order) and post-Reconstruction equality (and its use to form a new social order) continue to be at odds. This talk will offer perspectives on this competition of values within the right-to-vote context and describe how these tensions play out in the modern-day voter suppression debates.